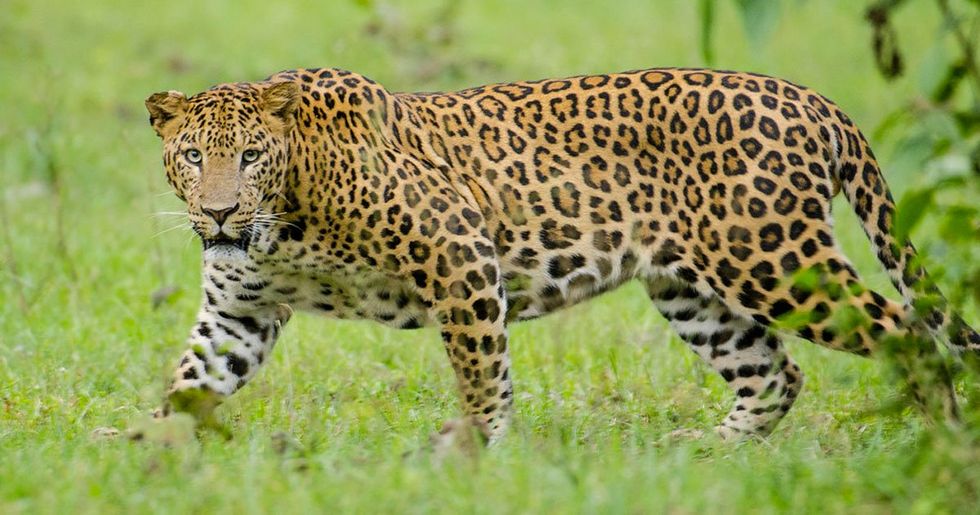 There's nothing like a weird picture to bring the internet together. Be it an optical illusion, a giant celebrity, or some incredibly well-applied makeup, trying to figure out why something looks the way it does is a surprisingly fun communal activity. But the latest one to go viral is driving everyone on Twitter absolutely crazy.

One Twitter user posted an image she'd been sent by a pal which supposedly contains a leopard. Or does it? The entire social media platform went into meltdown trying to find the camouflaged feline - and we're still not quite convinced we can see it.

There's nothing better than an optical illusion.

Something about the way they disrupt our realities means they make us feel uncomfortable - but in a deeply intriguing way.

And there's no shortage of them online.

This viral Instagram account is designed to freak you out using expertly applied (and undeniably creepy) makeup.

And sometimes an image really takes the internet by storm.

Like this ingeniously snapped photo of what looks like a giant squirrel trying to break into a car.

And who remembers this?

Professional wrestler and actor, Thor Bjornsson (who played the Mountain on Game of Thrones), posed with a normal-sized coffee cup - or did he?

And, earlier this year, this image went viral.

While many saw it as a beautiful beach scene, it was actually an old garage door in need of a lick of paint. Wild, right?

And while that image was more of a "hmm, interesting..." kind...

The latest snap to go viral on Twitter has elicited quite a different reaction - one of absolute confusion and in some, pure frustration.

And many are spending a lot of time looking.

Trying to find something in the image which some can't even quite believe is actually there.

The image in question?

It contains a leopard - or does it? The giant cat is so well camouflaged that many just cannot spot it - no matter how hard they try.

Here's the picture in question.

Someone just sent this to me and asked me to find the leopard. I was convinced it was a joke... until I found the leopard. Can you spot it? pic.twitter.com/hm8ASroFAo

At first, it looks like a pretty standard outdoor scene. But apparently, there's a leopard there. Yeah, we know. Us neither.

In fact, the Twitter user who first shared the image initially thought it was a prank.

"Someone just sent this to me and asked me to find the leopard. I was convinced it was a joke... until I found the leopard. Can you spot it?" wrote @BellaLack.

But then, she realized.

This wasn't a trick. There was a leopard in the image - it was just horribly difficult to spot.

Many users commented that they'd looked for a long time, and still couldn't find the cat in question.

Some made this joke.

I would be extremely dead before I spotted it.

If the leopard was using its camouflage to sneak up on us, we'd be goners for sure.

And even those who did find it ...

Claimed they'd had a lot of trouble in the process. You'll need to get your photo editing tools ready for this one.

In fact, some were ready to give up.

Someone please pm me the answer. I’m gonna go crazy if I stare at this dirt anymore.

Some Twitter users appealed to the kindness of strangers in order to help them solve the mystery.

Some pointed this out.

Leopards are notoriously good at hiding in plain sight - although this particular image might be the best hiding we've seen yet.

Although some made this upsetting point.

Unfortunately in a few years time people won’t be able to play this game as there won’t be any Leopards to spot!😩

While this leopard is literally hard to spot, it's also true that they'll be figuratively harder and harder to spot in the future.

PLEASE DON'T POST THE ANSWER so others can have a go. Thank you. :)

But, luckily for the optically-challenged amongst us, many people ignored the request.

So here's the result.

There's just one problem. Even with the leopard pointed out, we still can't see it.

So here's the final zoomed-in image.

At the left of the tree pic.twitter.com/97n5JOPUGt

Finally, we can spot it. But if we zoom out again ... nope, it's gone. Infuriating. Hungry for more optical illusions? Keep scrolling for thirty of the best.