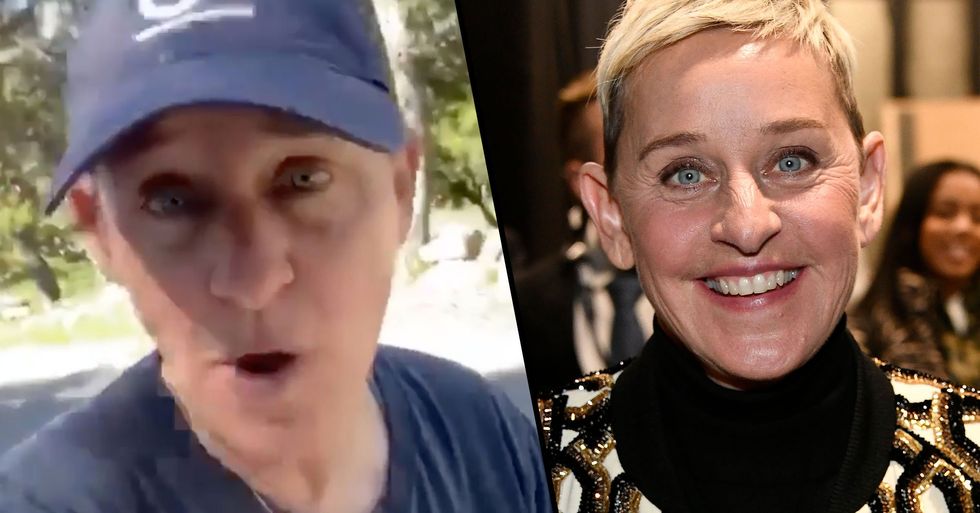 'Gross' Resurfaced Ellen DeGeneres Clip Shows 'Who She Really Is'

Rumors about the true nature of the seemingly warm and bubbly Ellen DeGeneres have been circulating the internet for years... But now, an interview from The Ellen Show has resurfaced, and people are convinced that it shows "who she really is."

This video really does not show Ellen in a positive light...

For years now, rumors about Ellen DeGeneres' true personality have been rife.

Though the television host appears to have a warm and bubbly demeanor while on-screen, her off-screen character is apparently a little less favorable.

Though she has built her on-screen persona around being outspoken against injustice and generous to the needy, many people have claimed that, in real life, she is quite the opposite.

Those who have met the star have claimed that she is nothing more than another power-hungry, self-centered celebrity.

ellen's whole thing about treating everyone with kindness only applies to people in her specific tax bracket, based… https://t.co/VXYccrutpJ
— JackAM! (@JackAM!) 1570713430.0

Which is certainly a far cry from the relatable and humble TV host we all know and love... Or we thought we knew and loved.

Ellen loves nothing more than to befriend the rich and the powerful...

Which, in itself, should be a hint at her true personality and values.

And, in recent years, Ellen's image has been questioned more and more.

Cracks have certainly begun to show, and rumors of the somewhat nastier personality behind the famous smiling blonde-haired, blue-eyed face have been intensifying.

Evidently, people who know the host have been growing tired of her flawless persona...

And, for many years now, a number of different former employees have been attempting to expose Ellen for who she truly is.

These employees certainly haven't held back.

Her behavior is shocking.

1. Ellen clearly doesn't care too much for writers strikes...

This Twitter user came forward with the story about Ellen's head writer, Karen Kilgariff. Karen was under Ellen's employment for 5 years until she took part in a writer's strike. Boom. Fired. And a word was never exchanged between the pair again.

2. More scandal regarding her treatment of staff.

@KevinTPorter @LAFoodBank My friend wrote for the Ellen Show for two years and told me Ellen didn’t greet her once.… https://t.co/rOK2u9C3mr
— Cathy Messier (@Cathy Messier) 1584724649.0

This woman claims that her friend used to work as a writer on the show and, in the whole 2 years of her employment, Ellen didn't greet her once. In fact, none of the staff were allowed to speak to the star of the show. Apparently.

3. Staff weren't even allowed in the same room as her.

Wow, we really aren't worthy, are we?

4. Her veganism has certainly ruffled a few feathers in the past.

Now this one won't surprise anyone. For a colleague's birthday, Twitter user, Alison Freer, was celebrating with a BBQ outside of the Warner Bros studios where The Ellen Show is filmed. However, Ellen was quick to shut down all the festivities by sending someone over to put a stop to the celebration, all because she doesn't eat meat. Not cool, Ellen.

5. The time she bullied Mariah Carey into admitting she was pregnant on The Ellen Show.

Okay, we all remember this one. In an episode that made us all want to claw our eyes out, an uncomfortable Mariah Carey was quizzed by Ellen on whether or not she was pregnant. And, when the singer wouldn't give an answer, Ellen wheeled out a bucket of champagne and pretty much forced a glass into her hand, stating, "Let's toast to you not being pregnant if you're not pregnant." Not your finest hour, Ellen.

6. She reportedly sacked someone for talking to her too much.

This Twitter user came forward with a damning story that, after a mildly autistic employee talked to and simply looked at the host too often, he was fired.

7. Ellen doesn't want any of her celebrity buddies to mingle with the common folk.

Ellen has notoriously sucked up to the rich and famous for years, and apparently she wants to keep them all for herself. When Russell Brand wandered into the employee break area to chat with the crew, Ellen apparently got quite irritated and told him that he "doesn't have to interact with these people."

@KevinTPorter @LAFoodBank A) She has a "sensitive nose" so everyone must chew gum from a bowl outside her office be… https://t.co/gWOvzUW3dI
— Benjamin Siemon (@Benjamin Siemon) 1584725127.0

And this highly sensitive nose apparently means that people working around her have to take extra care with their smell... Including chewing gum from a bowl outside her office before speaking to her. Some members of staff have even been asked to go home and shower. Now that's just rude.

9. She apparently chooses someone new to "hate".

@KevinTPorter @LAFoodBank B) A new staff member was told "every day she picks someone different to really hate. It'… https://t.co/pA7wtNI1Xh
— Benjamin Siemon (@Benjamin Siemon) 1584725185.0

A staff member was once told that, while filming, Ellen will randomly "pick someone different to really hate" for no reason whatsoever. And these poor employees simply have to suck it up and endure her wrath for the day.

10. Staff members are reportedly encouraged to cheer her up when she's in a bad mood.

There isn't enough money in the world that would ever encourage me to do that. Thank you, next.

11. Her compassion for animals strikes again.

@KevinTPorter @LAFoodBank D) She cares about animals which is good but so sensitive for example if someone tried to… https://t.co/xuFBexYB5j
— Benjamin Siemon (@Benjamin Siemon) 1584725438.0

Though it's great that she cares so much about animals, her sensitivity to the matter doesn't bode well for her employees.

12. She's notoriously picky with her scripts.

@KevinTPorter @LAFoodBank And E) If she doesn't like the monologue someone wrote that day, she'll drop it on the fl… https://t.co/mrDhB4AgXU
— Benjamin Siemon (@Benjamin Siemon) 1584725540.0

Apparently, if Ellen isn't impressed with a monologue, she will simply throw it on the floor and refuse to work with it. Again, rude.

13. She reportedly refused to pay tribute to Joan Rivers...

All because Joan's comedy was "the wrong kind".

14. Ellen apparently hates her own fans.

@KevinTPorter @LAFoodBank Comic I know became friendly with her, said she openly expressed her deep disdain for her… https://t.co/f5hFuC9CL1
— Chase Mitchell (@Chase Mitchell) 1584725118.0

And her own show! Who'd have thought it?

15. She tried to get a waitress fired. Apparently.

This social media user claimed that her friend was once working in a restaurant where Ellen was dining. She claims that Ellen attempted to get a waitress fired after she discovered she'd broken a nail. Ouch.

But, out of all these grotesque stories, there is one incident that is particularly dreadful.

And what commenced simultaneously horrified and delighted viewers.

The host stated, "You turned thirty... And, um, how was the party? I wasn't invited." The audience laugh a little awkwardly as Ellen defiantly stares at Dakota, clearly miffed that she wasn't on the guestlist.

But Dakota comes back with a shocking revealtion.

She had infact invited Ellen. She said confidently, "No, that's not the truth, Ellen. You were invited. Last time I was on the show, last year, you gave me a bunch of s**t about not inviting you... But I didn't even know you wanted to be invited."

Ellen looks incredibly uncomfortable at this...

And, as she grips tightly onto the arm of her couch, she stammers, "Well, who doesn't want to be invited to a party?" In which Dakota responds with a casual laugh, "Well, I didn't even know you liked me."

Ellen, with sheer panic in her eyes, shoots back:

"Of course I like you! You knew I liked you. You've been on this show many times, and don't I show... Like?"

Dakota laughs it off but continues:

"But I did invite you, and you didn't come." Ellen then plays dumb by questioning, "This time you invited me? Are you sure? How do you know... I don't think so."

And then, for the really awkward part...

Dakota points out, "Ask Jonathan, your producer." Ellen looks around desperately while attempting to string words together, "Was it... Was it...?".

A producer hastily comes to the recuse by calling:

"You were out of town!" In which Ellen says to Dakota, "Oh yeah I had that thing" before swiftly moving on.

It is the most unbearably awkward moment.

But people are loving it.

There's something immensely satisfying about watching Ellen get called out...

Especially in such a classy manner. You go, Dakota.

But others have dubbed the incident as "gross."

Ellen shouldn't be allowed to put this kind of pressure on her guests, plain and simple. It really shows the type of person she truly is.

You can watch the full clip here.

It is simply awful. For more on Ellen DeGeneres controversy, keep scrolling to read about her questionable relationship with George Bush...