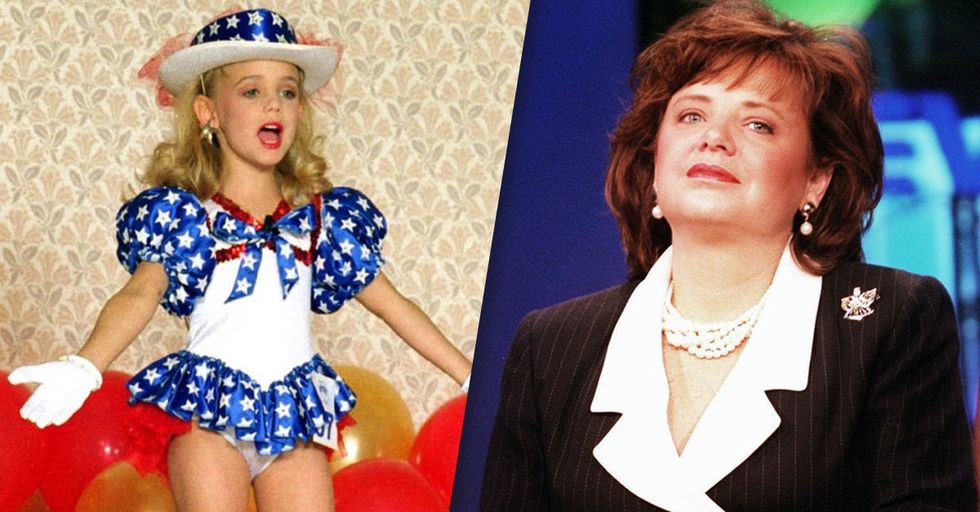 Unsolved Mysteries: Recent Information on the Case of JonBenét Ramsey

The murder of child beauty pageant queen JonBenét Ramsey captured the nation's attention back in the mid-'90s. As one of the great unsolved mysteries of our time, the notion that a parent could be held under "an umbrella of suspicion," as police put it, was both horrifying and gripping.

That said, the lack of any concrete answers let the case drift from our collective consciousness. But in the years since, more facts come out, and the case has taken some new twists and turns. Here's the most recent information we have on the murder of JonBenét Ramsey:

The JonBenét Ramsey case began in 1996.

First of all, let's go over the basics of the JonBenét Ramsey case as we knew it. On December 26, 1996, a mother from Boulder, Colorado, Patsy Ramsey, discovered that her daughter was missing and, later, a ransom note on her back porch. Claiming to be from a "small foreign faction," the note said the group had taken Patsy's daughter JonBenét, a six-year-old beauty pageant queen, and demanded a 118,000 dollar ransom for her return. Later that day, JonBenét was found dead in the family's home, her skull fractured and her hands tied. Since whoever the intruder was seemingly had access to the home, the Ramseys — Patsy and her husband John — were looked at with suspicion both by the Boulder police and the American public at large. The brutal nature of the killing, along with the many bizarre twists and turns the investigation took launched the case into the national consciousness. It made the cover of countless supermarket tabloids for decades.

In 2006, John Mark Karr confessed to the crime.

While numerous theories about who killed JonBenét floated in the public ether for years, usually involving the Ramsey parents, it wasn't until August, 2006 — a full ten years after JonBenét died — that anyone confessed to the crime. And even that confession turned out to be spotty. John Mark Karr was a schoolteacher in Thailand when he confessed to the crime and was arrested before an investigation could fully occur. After all, the guy had just started teaching second grade. As Mary Lacy, who ran the JonBenét investigation at the time, told NBC News, “There are circumstances that exist in any case that mandate an arrest before an investigation is complete." But then, after being extradited to the United States and given a DNA test, Karr was... ruled out as a potential suspect? It's still unclear why Karr confessed to murdering JonBenét when his story didn't line up with the evidence found at the scene whatsoever. He was released in October of 2006.

So much of the JonBenét case had orbited the parents of the slain beauty queen, so when it was revealed that not only had Patsy Ramsey battled ovarian cancer in 1993, but that it had returned in 2002, it felt like yet another strange, dark turn in the lives of the Ramseys. And for those of us who were morbidly fascinated with the JonBenét case, this has to be one of the most confusing of the case's twists. It was in dealing with the idea that a pair of parents could murder (or cover up for the murderer — more on that later) of their own daughter that made the case so horrifying. For much of their lives after losing their daughter, the Ramseys were looked at as the villains. But through her sickness, Patsy Ramsey became a human again — a woman dealing with a monumental tragedy who then had to deal with another tragedy on top of it. Either one, on their won, would be heartbreaking.

Then, in 2008, the Ramseys were formally cleared.

While it sadly came too late for Patsy to get even the modicum of closure such an admission would provide, both she and John Ramsey were formally cleared of any suspicion in the death of their daughter by Colorado District Attorney Mary Lacy in 2008. New DNA tests, along with evidence discovered on a pair of long johns found at the scene that the killer supposedly removed, proved that JonBenét's killer couldn't have been a family member. The forensic evidence recovered both from JonBenét's panties and the long johns pointed to a "unknown male," someone with no genetic links to the Ramseys. In a letter to the Ramsey family, Lacy wrote, "To the extent that we may have contributed in any way to the public perception that you might have been involved in this crime, I am deeply sorry." Officially, after 12 years of living under its shade, the "umbrella of suspicion" was lifted.

In a move that typically comes along with new evidence, investigators called in a number of individuals involved in some way with the JonBenét case for new interviews in 2010. One of those people called in was Burke Ramsey, JonBenét's brother, who was nine years old at the time of her killing and was in the house that night. It's theorized that, since police are simply mandated to re-open cold cases from time to time and find out if any new information has come to light, there may not have been any new evidence to warrant the new interviews. But was the fact that police wanted to talk to Burke Ramsey significant? Larry Schiller, author of the book "Perfect Murder, Perfect Crime," which centered on the JonBenét case, told ABC News at the time that calling in Burke was "a matter of can they corroborate something they know about or that they suspect may lead them to a solution." But Burke had been a subject of speculation long before this interview.

Burke has since sat down with, of all people, Dr. Phil.

As 2016, and thus the 20th anniversary of JonBenét's death, drew near, Burke Ramsey — who, again, it must be stated, was nine years old at the time of her killing — felt like he had to come out of the semi-reclusive state he'd lived in more or less since his sister was killed in 1996. Now, Burke had been a subject of speculation in the JonBenét case for a long time. With so much suspicion surrounding John and Patsy, the question of why they'd want to hurt their own daughter could never really answered. But if Burke had done something to hurt, or even kill, his sister, then a cover-up from the Ramsey parents would make sense — if they'd already lost one child, couldn't you see how they'd go to any lengths not to lose the other? Again, to be clear — that's incredibly outlandish, but the theory was out there. And Burke's 2016 interview with Dr. Phil, wherein he smiled awkwardly throughout and laughed at seemingly inappropriate times, maybe didn't do him, a ton of favors.

Burke also filed suit against CBS for a docu-series.

Then, in 2017, Burke Ramsey filed a defamation suit against CBS for their production of The Case Of: JonBenét Ramsey. In the 2016 documentary, ostensibly a complete re-investigation into the killing, it was again suggested that Burke Ramsey was the killer and his parents had covered it up. And since it certainly seems like The Case of: JonBenét Ramsey got it wrong, Burke's 750 million dollar lawsuit against its producers, CBS, and the forensic pathologist involved in the documentary, Dr. Werner Spitz, appeared to have merit. And while the number may seem high (and officially, we don't know the exact sum Burke received, as the case was settled out of court), you have to ask: how do you put a price on having a major broadcast network air a documentary suggesting that, even as a baby boy, you were a stone-cold killer? Now that this case is settled, and hopefully the rather ghastly theory that one child had murdered another can be put to bed.

In 2013, we learned a grand jury suggested charges against the Ramseys.

Even though John and Patsy were cleared in 2008, we learned in 2013 that a grand jury reviewed the evidence against JonBenet's parents and actually recommended an indictment back in 1999. The then-District Attorney of Colorado didn't agree, claiming there wasn't enough evidence to pursue charges. It's a slight stumble in the narrative of the 2008 clearing of the Ramseys — why did the Grand Jury see that the District Attorney didn't? Plus, te fact that people in a position of authority were ready to move ahead with the case against John and Patsy suggests that the notion that these parents could harm their own child wasn't as fringe as once thought. To be specific, the Grand Jury was ready to charge the Ramseys with Child Endangerment and not murder, according to CNN, saying they "did... permit a child to be unreasonably placed in a situation which posed a threat of injury to the child's life or health which resulted in the death of JonBenet Ramsey."

Then, just this year, a new confession.

Out of the blue, 54-year-old convicted pedophile Gary Oliva starts sending letters saying that he killed JonBenét. An old high school classmate of Oliva, Michael Vail, gave Boulder police a series of letters written to him by Oliva, who is currently in the midst of a ten-year-long prison sentence for possession of child pornography. In his letter, Oliva wrote, “I never loved anyone like I did JonBenét and yet I let her slip and her head bashed in half and I watched her die." It's disturbing, to be sure, but was not taken seriously by police. As Oliva was a known sex offender living in the area of the Ramseys at the time of JonBenét's killing, he had been looked at in the past. At this moment, investigators are not taking his confession seriously. But this is the same question raised by John Mark Karr — why confess to such a horrible crime if you weren't the perpetrator? Does the national, sensationalized nature of the case make it a prime target for desperate weirdos looking to become famous? It's another odd, uncomfortable wrinkle to an already horrifying case.

The case remains unsolved, but JonBenét's half-brother is confident the killer will be found.

And so, as we enter the year 2020, a full 24 years after her death, the question of who killed JonBenét Ramsey is still unanswered. And yet, the fact that the case has had so much new information come to light in the years implies that, as forensic technology gets better and better, there are more opportunities for the case to be solved. And one person who is convinced it one day will be is JonBenét's half-brother, John Andrew Ramsey. “We have the killer’s DNA... so that’s hugely important and will ultimately solve this crime," said John Andrew on an episode of the podcast Killing of JonBenét: The Final Suspects. “There are additional items that should be tested given today’s new technology for additional samples," he continued. "And then... the advent of using genealogy to identify a killer is hugely promising, and that technology will only get better."