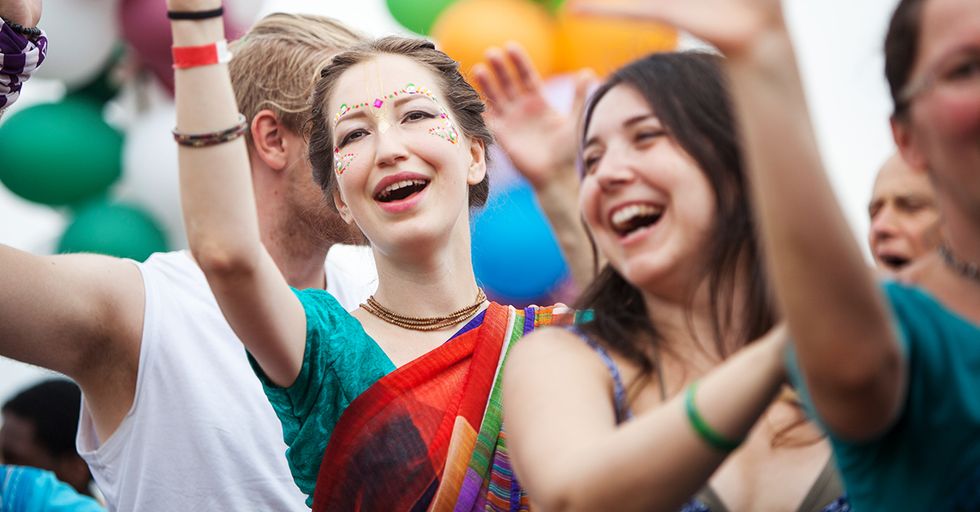 16 Red Flags That You Might Be in a Cult

Most of us have experienced some level of curiosity when it comes to cults. We may wonder how anyone could possibly "fall for" them...or we may find ourselves wondering whether we might be victims if the circumstances were right.

Cults often start out with such lovely, lofty goals: Jim Jones was a staunch supporter of racial equality. Father Yod was an advocate for natural health and a utopian lifestyle. Osho preaches that every human being is capable of unconditional love.

In short, it all sounds a bit too good to be true. And then you find out that, in fact, it's pretty bad. Really bad, in some cases. We've all heard the horrifying stories of Jonestown, Heaven's Gate, and The Children of God.

Still, regular people just like you and me join cults pretty regularly. Is there a chance that you've accidentally joined one yourself and don't even realize it?

But I bet if you asked actual cult members, they wouldn't admit to being in a cult, either. That's kind of how they work.

First of all, what is a cult?

Literally speaking, a cult is a social group that's defined by its religious, spiritual or philosophical beliefs, or its common interest in a personality, object, or goal. That doesn't sound too scary, right? Well, that's kind of the point.

When taken at face value, the definition of a cult actually sounds kind of...nice.

A group of people united by a single cause? Sign me up! Not so fast. When you take into account the sociological side of things, cults can be a bit more nefarious. The social group is typically socially deviant in some way — not necessarily a bad thing, but it could lead to dangerous situations. We've all heard the stories of terrifying cults that start out sounding great and end up being traps where people are stuck for their entire lives — or even killed for some kind of cause deemed important by the cult leaders. Here are some signs that the group you're involved with may actually be a cult.

1. Zealous Commitment to the Leader

Whether the cult leader is living or dead, the cult members revere them with absolute devotion. His thoughts, opinions, and belief system are considered absolute truth.

This commitment reaches beyond mere admiration.

The followers don't just think fondly of their leader. They see their leaders teachings as law and refuse to accept knowledge or information from any other source.

In a healthy social setting, people should be encouraged to question everything. After all, skepticism can be a very healthy trait when it comes to making huge decisions that affect a large group of people!

But in a cult? Not a chance.

Anyone who questions the group's leader or tenets is considered a traitor to the group as a whole, or even a danger to its constituents. Doubt or questions may even be punished.

This could include anything from meditation to chanting to speaking in tongues (although to be clear, not everyone who participates in activities like this — even in a group setting — is necessarily involved in a cult).

The purpose of these activities is to suppress doubt.

Humans are social creatures. Therefore, if one person sees their friends and contemporaries participating in some sort of group chant or denunciation service, they'll naturally want to be part of the crowd and participate as well. Going against the grain might not only be dangerous; it could be undesirable from a social standpoint as they don't want to lose their friends.

4. Members Must Seek Permission Before Engaging in Certain Activities

Since the cult leader's word is law, he or she must be consulted in the event that a member wants to do certain things such as date, change jobs, or marry someone. Perhaps this should go without saying, but in a non-cult situation, the person making those decisions is...well, the individual.

In addition to seeking permission, members must abide by the guidelines set forth by the leaders.

Getting permission goes beyond simply making a life change like getting married or having kids — cult members must follow the leader's rules when it comes to how to raise those children, where they should live, what schools (if any) their children may attend, and basically every other aspect of their lives.

5. The Group Is Elitist

Essentially, this means that the group — and its leader — consider themselves to be the cream of the crop. They aren't mere mortals; they're on a special mission to save humanity.

In some cases, cult leaders aren't merely on a mission from God — they are a god.

Which goes back to their own word being law. You wouldn't want to go against God's word, would you?

6. The Ends Justify the Means

Basically, this means that the group's mission — whatever it is — is to be held in the highest regard. Higher, even, than the laws and mores which dictate how non-members behave.

This means that members may engage in some activities which they would have previously thought reprehensible.

Such as lying to their families and friends in order to get their support (or money). They might also collect money for bogus causes and charities, having convinced themselves that lying or other immoral activities are simply what's necessary to accomplish the group's goals.

7. A Strong Us vs Them Mentality

The group separates itself from the rest of the world — both mentally and, often, physically. This, along with feeling justified in breaking the rules of society — can lead to a lot of conflict between group members and non-members.

8. The Leader Is Not Accountable to Other Authorities

This is a big one. A cult leader, as the being who is in charge of the group, does not answer to any other authorities.

Obviously, this is in stark contrast to other types of leaders.

Such as the Pope, who ostensibly answers to God, or military commanders who must follow the chain of command (even though they are themselves in charge of groups of people).

9. Shame and Guilt Are Prevalent

Shame and guilt are the two most popular tools in the cult leader's toolbox. They are often accomplished through peer pressure and very subtle forms of persuasion. As we've already mentioned, humans are social creatures who long to be part of a group. If they are made to feel guilty or shameful for something they've done, they're more likely to fall in line and conform to the rest of the group.

Sometimes, a single mistake is enough to fill a member with enough shame to never stray from the path again.

Rather than feel validated by their skepticism or curiosity about the outside world, they feel ashamed and vow never to question the leader's teachings again. They may even become useful in dissuading others from doing their own questioning.

10. Group Members Must Cut Ties with Their Families

Most cults require their followers to cut contact with their family and friends (unless, of course, those people are already members of the group).

In addition to cutting contact with "outsiders," group members may have to make other drastic changes to their lives.

This might include radically altering their personal goals and even the activities they engaged in before joining the group. Such changes could be as small as changing their diet, or as large as leaving their home to move to a compound.

11. A Preoccupation with New Members

If there's one thing a cult likes more than its own members, it's potential new members. First of all, bringing more people "into the fold" is a definite ego boost to the leader, who feels powerful for having control over a growing number of people.

Members may be expected to pay dues to the group, or even sell everything they possess or take out loans to give money to the group. As such, a big part of being a cult member is trying to convert others and convince them to join the group as well. (This is typically done through the same manipulative tactics that cause people to feel shame for dissenting.)

12. A Preoccupation with Money

No matter how much money a cult brings in, it's never considered "enough." Often, cult leaders will make increasingly more desperate demands for members to turn over money, perhaps even promising that they'll eventually get their money back. They won't.

Members of a cult are expected to devote inordinate amounts of time to the group — this can include completing jobs or "missions" for the group or participating in other group-related activities. Friends and family members of cult members — assuming ties to them haven't already been cut off — will notice and often comment on the fact that they never seem to see their loved one anymore.

14. A Requirement to Socialize with Fellow Members Only

This goes beyond cutting off contact with non-member friends and family members. Unless they are actively engaged in trying to convert a non-member to the group, a member's contact with outsiders is extremely minimal.

This could simply mean that they don't engage with outsiders in their everyday lives...

...Or it could be as drastic as choosing to live among members and refusing to acknowledge there's an outside world at all.

15. There Is Nothing Worth Pursuing Except the Group's Goals

In a cult, the most devoted members are firmly convinced that there is no life outside the context of the group. Every decision they make, every thought they have is focused on what is best for the group and its leader.

Most — if not all — cult members feel fear. It may be set aside briefly during group activities or gatherings, but it's there. Even the most devoted members fear what may happen to them should they choose to leave (or even consider leaving) the group. Share this list with someone who may find it interesting!

Dog the Bounty Hunter Hit With $1.3M Lawsuit Amid Search for Brian Laundrie