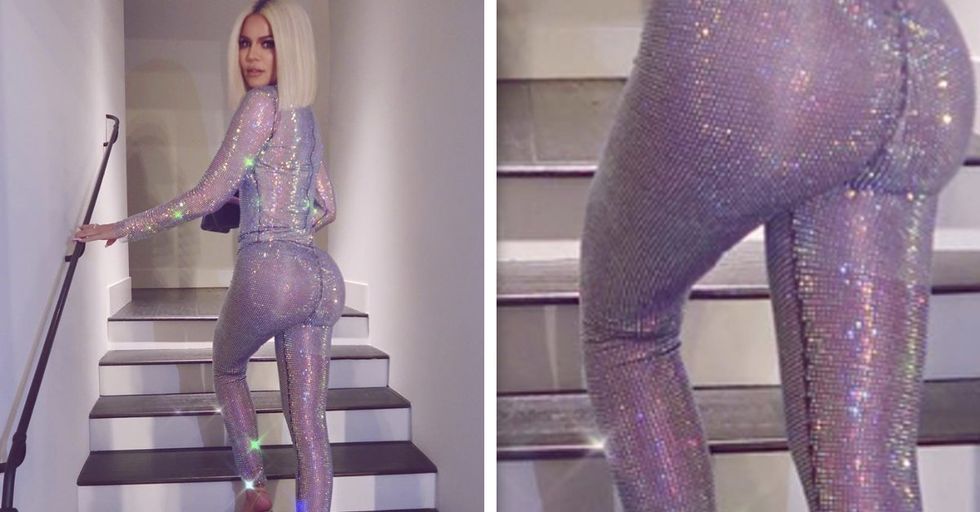 The Worst Kardashian Photoshop Fails Caught By Their Fans

Say what you will about them, but the Kardashians are arguably the world's most famous family. With business ventures in fashion, cosmetics and reality TV, these women are everywhere. Like any celebrity family, they have their fair share of fans and haters. Their show, Keeping Up with the Kardashians, just had its 16th season premiere on E!. When it first launched back in 2007, most of the world only knew who Kim Kardashian was because of a leaked sex tape and her role of Paris Hilton's BFF/stylist. How times have changed...

People feel strongly about the Kardashians, but you can't deny that they're unapologetically themselves. They let everything (and really, everything) hang out for the world to see, offering viewers a glimpse into the madness of what it's like to be part of one of the richest, most glamorous families on planet earth.

Aside from their curves and seemingly constant drama, the Kardashians are also known for their use of photoshop. Fans have been quick to point out their photoshop mishaps, and really...there are quite a lot of them.

Keep reading to see the worst Kardashian photoshop fails, caught by their fans.

This is the Kardashian-Jenner family.

With 16 seasons of their reality show under their belt and more money than most of us can imagine, these women are thriving. There's a good chance that even if you've been living under a rock, you've heard of them.

They've been on our TVs for over a decade.

We've seen them go from Calabasas girls simply running their own clothing store, to worldwide celebrities and TV personalities.

The queen of them all, Kim Kardashian, is arguably the most famous Kardashian sister. Her cosmetics line, KKW Beauty, has helped launch her net worth to roughly $350 million. Not to mention her selfie game is truly next-level.

The eldest Kardashian, Kourtney, is a lover of all things organic. In April 2019, she launched her own lifestyle and wellness brand, Poosh (named after her daughter, Penelope).

Khloe launched her body-positive and size-inclusive clothing company Good American in 2016. The line began with a focus on denim but has since expanded to include work-out clothes and a fabulous selection of bodysuits.

But, as we all know, the Kardashian empire doesn't stop with only these three... It is the Kardashian-Jenner expanded universe, after all.

Momager extraordinaire, Kris Jenner is a successful businesswoman, juggling the craziness of her children's lives. Also, she loves mimes. Any Pierre the Mime fans out there? (What a zany episode that was).

She may only be 21, but the youngest Kardashian-Jenner child is a "self-made" billionaire, thanks to her Kylie Cosmetics line. Everyone really started paying attention to Kylie when she overlined those lips of hers and launched her lip kits.

Kendall is the Victoria's Secret model of the family. She has her own busy career, flying all over the world to walk in prestigious fashion shows and shoot covers for tons of magazines.

The famous family is often very open about the plastic surgery they've had done, but something that fans often point out is their excessive use of photoshop. For instance, they recently released this promo pic for their most recent season premiere:

And fans were quick to point out some issues with the picture. Can you see any photoshop mishaps?

One fan pointed out that it looks like Kendall was photoshopped into the picture.

Her frozen pose looks incredibly unnatural. This fan also pointed out that Khloe seems to be missing the latter half of the body, though it might just be hiding under her poofy skirt?

Another fan pointed out that Kourtney's foot looks a bit strange...

Do you think they photoshopped Kourt's foot? You wouldn't think a foot would need photoshop, but the Kardashians do whatever they want. Fans have pointed out a lot of seemingly bad photoshop fails that the Kardashian-Jenners post online. Keep scrolling for the worst ones...

Fans pointed out that if you look to the left of Khloe, the image seems to be warped, suggesting that she doctored the photo before posting. Khloe deleted the warped one and re-posted, sans editing.

At first glance, this selfie of Kourtney and her pal looks fine, right? But you'll notice that her armpit looks a little strange. What photoshop could an armpit need?

Did Kylie elongate her jeans and torso area?

Fans believed that Kylie photoshopped her derriere and pointed out that the stretched-out jeans were a giveaway.

Fans were convinced that Khloe edited her stomach for this photo, pointing out the weird, detached look of her waist over the leggings.

The distorted doorframe in the back seems to suggest that Kim edited this photo of her and Blac Chyna. Perhaps more shocking than the poor photoshop job is the fact that at one point in time, these two were close enough to take a picture together.

If you look closely, you'll see that Kris seemed to have edited her arm. Fans believe that the fuzzy lines are an indicator of poor photoshop skills.

Fans pointed out that Khloe and now ex-boyfriend Tristan Thompson's hands seemed to be blurred together. It's hard to say if this is just the distance from which the photo was taken or a terrible editing job, but either way, it looks odd.

Fans pointed out that the molding in the back of Kendall Jenner's hotter-than-hot photo appeared to be warped, suggesting something isn't right with the image.

A lack of knees

It looks like Kendall and fellow model Gigi Hadid lost their kneecaps on this cover for W Magazine. Their legs don't look real at all.

In this picture of Kim and BFF Jonathan Cheban, you can see that Jonathan's waist has clearly been edited. Someone needs to double-check these photos before they're posted... Keep reading for even wilder photoshop fails.

The Kardashians are never ones to shy away from filters, but this is some serious editing. Can you spot the differences between the filtered photo (on the left) and the unedited photo, on the right? You can see that her waist was trimmed, her face warped to look thinner, and her chest is higher.

Look to the right

When Kim posted this mirror selfie from the set of a photo shoot, fans pointed out the warped wall on the right. Did Kim edit the photo to make her hips curvier and waist smaller?

Khloe is never one to shy away from a filter, but this one seems pretty intense. As one person commented, "What the heck? She changed so much."

Fans pointed out that Khloe's face looked different in this photo. It could be the work of makeup and lighting, or overuse of editing apps like Facetune.

If you did a double take at this photo, know you aren't alone. One user commented, "That's not Khoe, I swear." The photoshop editing is jarring.

One person commented, "Really? Real people don't look like this."

Kim has a killer body and works out like crazy, but some fans were convinced that this photo was doctored. "This is photoshopped," one pointed out.

And of course, this photo...

Kim actually disabled comments on this Instagram, likely because of everyone calling out the warped background. Share this with a friend who is obsessed with the Kardashians!
scroll